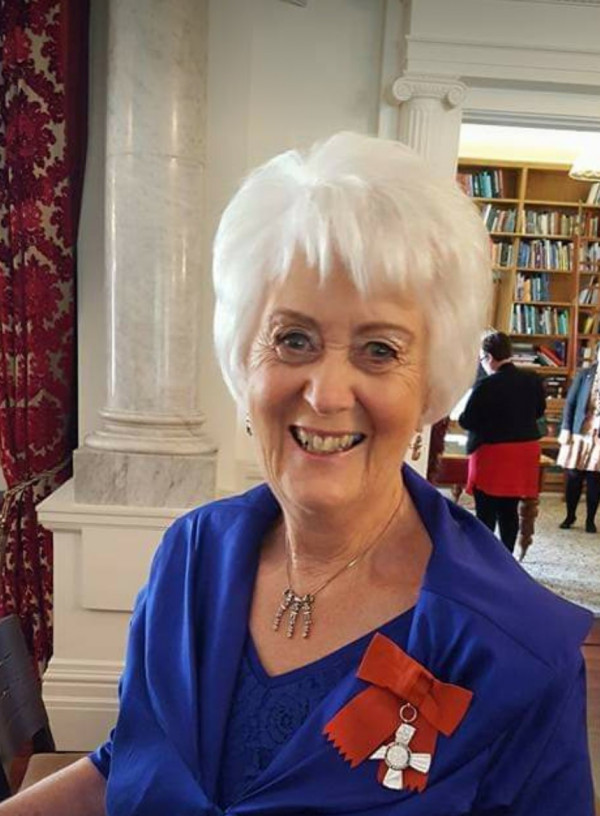 Peacefully at home on the 26th of April 2022, in her 80th year.  Love wife of the late Boyd, loved partner of Peter Garden, much loved Mum and mother in law to Ewan and Vanessa (Winton), Janine and Jeremy Byars (Waikaka) Phil and Maria (Dunedin), Geoff and Jodelle (Hokonui) and Tara (Dunedin).

Nana Bev to all her Grandies and extended family nieces and nephews. Sister and sister in law to David and Jesse Fraser, the late Henry and late Leah Fraser, Jennifer and the late Irwin Clearwater.

A memorial service to celebrate Bev’s life will be held on Sunday the 1st of May 2 p.m. outside at Rippon Vineyard Amphitheater, 246 Aspiring Road Wanaka. Rugs/blankets recommended.

An amazing true lady.
Jan Douglas , Winton
To the Clark family, Please accept my sincere Sympathy for your sad loss.
Dulcie Evans. (Blyth), Invercargill.
Deepest sympathy to family and friends.
Bev and I went to school together in Winton many many years ago.
Heather Cooney (née Jackson), Queensland Australia
As a member of CANZ working as a celebrant is so wonderful. I did not know Bev personally but will be forever grateful for her vision and enthusiasm to recognise Celebrants in NZ as professionals and create a professional body, organisation for Celebrants to be proud to be part of. Much love and comfort to all of Bev’s family.
Sally Cattle, Oamaru
Dear Peter, and Bevs family.....so.sad to hear the news. We are coming down
on Sunday blankets ' n all.
See you then .much love
Allison
Allison Mareko, Silverstream Kaiapoi
Our thoughts are with you Clark family. Such a wonderful warm and vibrant person and a much loved friend to mum. Both Joy and I send you our love.
Tanya and Joy St George , Wellington
Deepest sympathy to all the family ‘
I worked for Bev and Boyd in the 60s ‘and Bev was a lovely lady .
Wayne Lynda Pierce , Arrowtown
On behalf of the CANZ Auckland branch and committee, our deepest sympathy to Beverly's family for your loss . You are in our thoughts and prayers . Kind Regards Patricia Cosford ,Auckland Chairperson .
PATRICA COSFORD, Mt Wellington ,Auckland
Our deepest sympathies to the family. Bev was a wonderful person who helped fill our Winton days with fun and laughter. Behind this also was a keen mind, superb management skills and the ability to lead others by example.

Phil and Clare, Anna, Sarah and Nicola Jacobs, Christchurch
To the Clark family.
Our deepest sympathy to you all at this sad time. Our thoughts are with you.
Sue & Donald Shaw Forest Hill
Sue, Shaw
To Peter and Bev’s family
This world has truly lost a beautiful soul. Wishing you loving memories to forever hold in your heart, and comfort in the days ahead. We have very fond memories of this very special lady.
Richard and Robyn Lee and family, Queenstown
How lucky were we to have you in our lives Bevvy. such a good friend and a good human. XXXX
Marg Bones Libby and Beth, Alexandra
Beverley was a person who always squeezed the most out of her life as a wife, mother, friend and later as a community advocate. We saw this approach and enjoyment of life with Boyd and the family while farming Hokonui and later when they moved to Wanaka.
Whatever she did, she gave of her best.
This was witnessed in the work she done on behalf of health consumers,on local and national ethics committees- she was highly regarded and respected by colleagues across all health professions and lay persons involved. She was not afraid to ask the hard questions. Always diligent in her preparation and well informed on whatever topic was being considered
She valued all of the people she worked along the way and this was reciprocated
Whatever she participated in, it was never about her, it was always about what was best for the community she served
It was not all serious though, she had a wicked sense of humour and enjoyed getting up to mischief from time to time. An example of this was when Bev helped us participate and entertain the community, when the 'Edna' group put on a pot luck night in the Lumsden hall. This was during the dark days of farming in the late eighties. Like all of us she was not afraid to dress up and help make fools of ourselves to get people laughing, something which was desperately needed at that time.
She took on many challenges in her life, making sure that whatever the project was, large or small, the best outcomes were always the goal, and delivered to the highest standard.
Bev endured through many challenges in her life, but this last massive challenge to her health she met with stoicism, understanding and tolerance, this was helped enormously by the thoughtful and compassionate care of Peter.
Bev leaves a legacy of love, endurance, resilience. She set fine example to all of us of a life well lived. These are the memories we have of her which we will all carry into the future.
Marion Miller

Marion Miller, Invercargill
Sincere sympathy ❤️
Maree & Dave Smyth, Dunedin
We treasured Bev as a friend and wonderful host on the occasions we stayed with her. Even more we respected her for the person she was and we are deeply saddened at her passing.
Bill & Olwyn O'Brien, Mosgiel
Bev was a special woman; a true friend and a big part of our lives, especially during Wanaka days. She will be sadly missed but always remembered. Sending all my love to the whole family. Sorry I couldn’t be there in person during this time. So glad I got to share a video chat with Nana Bev, Neen and Tara not too long ago. Vanessa, Paul, Harry and Scarlett xxxx
Vanessa Cathie , London
Sending our deepest sympathy to you Peter and the Clark family, thinking of you all at this very sad time, take care, with love and thoughts Ham and Sue Swale and Family..
sue swale, Winton
hey Phil so sorry to hear that your gorgeous mum passed. she was a darling and a very special lady who married Lucien and I. thinking of you
big hugs lynley skinner x
lynley verkerk, oamaru
To the Clark Family, very sad to hear the passing of Bev, Phil we have a special place in our hearts for your lovely mother, she made our wedding day relaxing and special.
Regards Craig and Rebecca Matheson
Craig Matheson, Christchurch
I will always remember Bev as such a gracious, wise lady - a beautiful person inside and out. We were both elected to the first National Executive of CANZ and spent many years together as we helped grow this new national organization. Over the years Bev came and stayed with us in Auckland and I had the pleasure of visiting and staying with her in Wanaka. It was a pleasure and a privilege to call her a friend. She has left many wonderful memories, such a treasure!
Sherryl Wilson, Orewa, Auckland
To Peter, and Bev's Family,

Please accept our deepest sympathy in your sad loss of Bev. Our thoughts have been with you all.

With our kindest regards,
Norman and Shona Welsh
Shona & Norman Welsh, Riversdale
To Bev's family, please accept my sympathy as you remember Bev. I knew her through Jude and also way back when she was involved in work with the health system in the 90s on the Southern RHA. She was a wise and caring woman, who contributed so much to the world she lived in. My thoughts are with you. Treasure the beautiful memories. She will always will be in your hearts and with you in spirit. Arohanui Claire Ramsay.
Claire Ramsay, Dunedin

Leave a message for the family of Beverley Alice Clark

Leave a message as a family member of Beverley Alice Clark

The number of people allowed to attend the service has been reached or the time to book has expired.